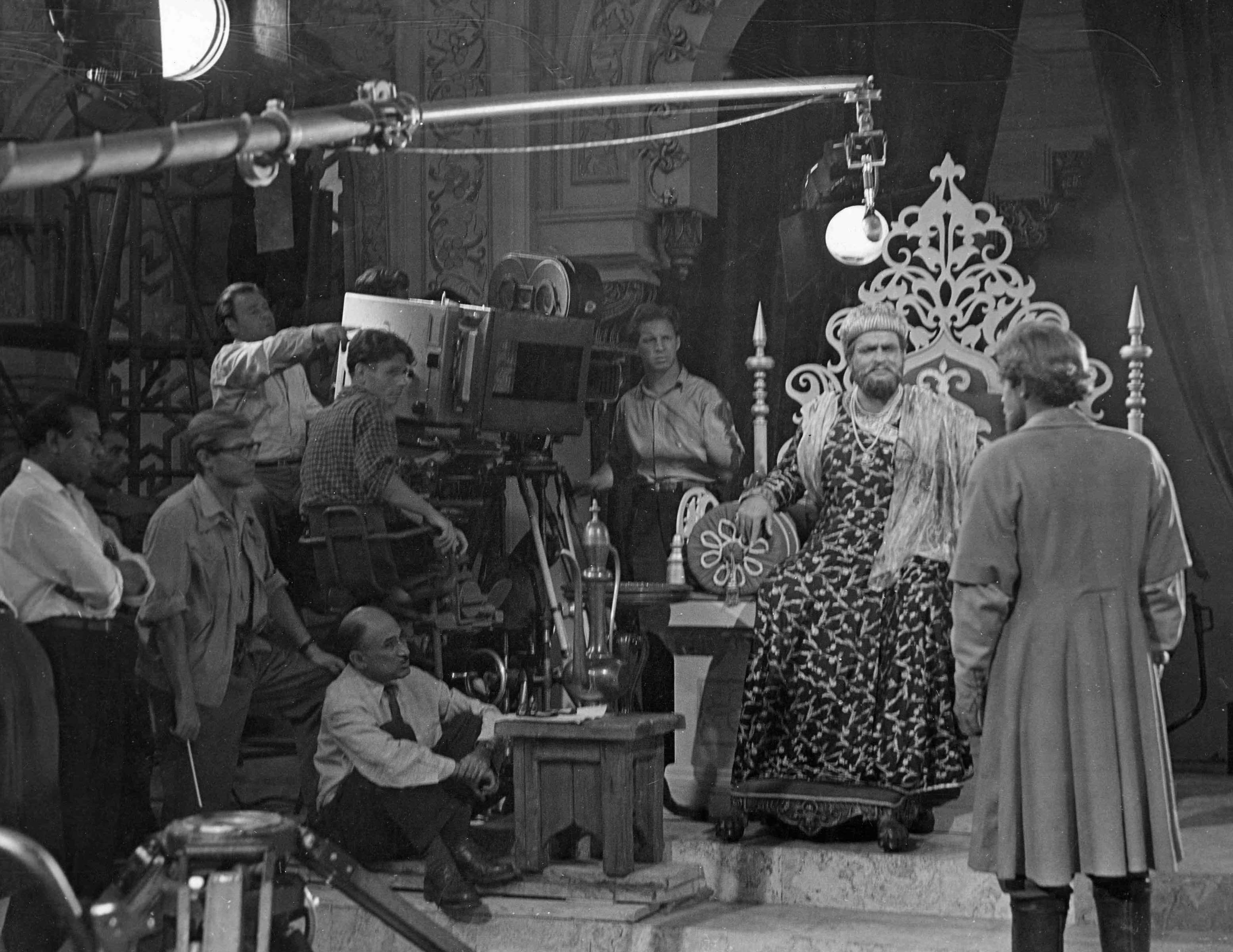 Requiem for a Friend

Death be not proud, though some have called thee
Mightily and dreadful, for, thou are not so,
For, those whom thou thinkist, though dost overthrow
Die not, poor death

Unafraid of death, he loved life. Early on, his mentor and hero, Jawaharlal Nehru, had counseled him to ‘live dangerously’.  That he did. Abbas did nothing out of fear or expediency. He had the courage of his convictions. The ideals and values he held dear found expression in his books, his films, and his journalistic writings. He abhorred political dogma and religious bigotry. He was a truly secular man. Because he would not submit to any label, at one time or the other in his life, he was denounced by Congressmen, Communists and communalities. In 1943, he was turned out of the Progressive Writers Association and Indian People’s Theatre Association (two associations he had helped found and nurture) over ideological differences. But it is a measure of his large-heartedness that not once did he utter a word against those who had denounced him. Abbas touched many lives and enriched them with his deep humanity, his vast knowledge, and his immense love. I was privileged to be one of them. 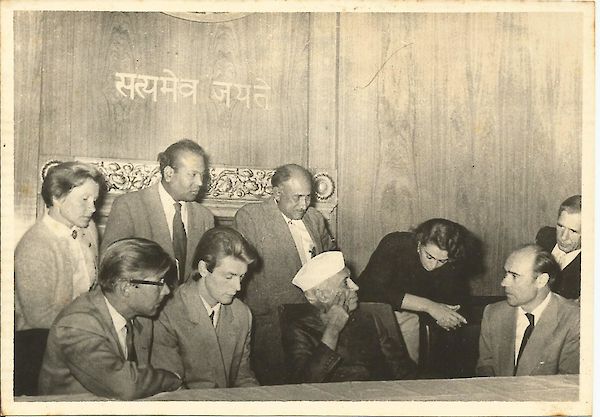 It was in 1944 that I first met Abbas. He had come to deliver a lecture at V. Shantaram’s Film Academy (now defunct) where I was a student of cinematography. Abbas spoke on the films of Shantaram and compared his work with those of his contemporaries - Debaki Bose, Nitin Bose and P C Barua - and said that Shantaram’s faith in life was above, and far beyond the lyricism of Debaki Bose, the romanticism of Nitin Bose and more pointedly, the pessimism of Barua. He stated his views with conviction and clarity. He said he preferred films that showed the individual’s struggle and final victory. Citing an example, he mentioned Chaplin’s Modern Times and its final sequence showing the tramp and his girl, with undiminished courage, walking arm in arm down the road towards the horizon. This must have been one of the first film appreciation lectures delivered in the country. It may be recalled that Abbas was the first journalist (and Bombay Chronicle the first newspaper) to write an editorial on Shantaram’s Padosi and a front page review of Chaplin’s The Great Dictator.

I met Abbas off hand on the sets of Dr.Kotnis (Dr. Kotnis ki Amar Kahani, 1946) which Shantaram was directing from Abbas’ story. But our meetings were brief and did not lead to any close personal contact or friendship. That was to come later.

After the traumatic experience of partition, I was in Kashmir planning a documentary film on the raiders from across the border. Abbas had come there at the invitation of Sheikh Abdulla and was staying with his wife in a large houseboat. I remember he invited me to move to his houseboat. This was the beginning of our friendship and collaboration on various ‘ventures and misadventures’ as he put it. Kashmir in 1948 was then the most exciting place to be in. Raiders from across the border had overrun the valley - pillaging and killing innocent people. They did not spare even the nuns and burnt a chapel. There was widespread anger and revulsion against their atrocities. While our army took care of them along the border, groups of small boys and girls went around the streets shouting slogans.

There were journalists and photographers from all over the world who would come to our houseboat. It is there that I met Henri Cartier Bresson for the first time. In the evenings the entire young cabinet of Sheikh Saheb which included D P Dhar - a firebrand revolutionary who always arrived with a rifle slung over his shoulders, would assemble there. Apart from them, novelists, writers, and musicians would gather in our houseboat which acquired the reputation of being a literary and artistic workshop. I could not have asked for a better school of learning.

Meantime, I had finished the shooting of my film Storm Over Kashmir, the title of which was provided by Abbas. He knew that I had very little money for post-production work so he gave me letters to two of his friends in Bombay. This is how I came in contact with V P Sathe and Romesh Thapar. 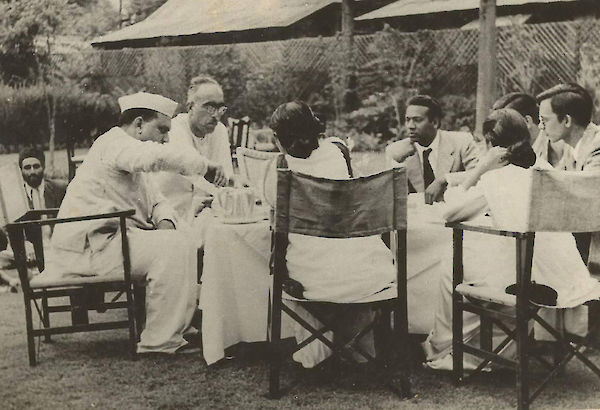 About this time, two cases were filed against Abbas on charges of writing objectionable matter. One was by the bureaucrats of U.P. for a story called Sardarji and the other even more damnable was by his communist friends for writing a preface to Ramanand Sagar’s novel Aur Insan Gaya (And Man Died) about the Partition. While the U P court exonerated Abbas, his literary friends boycotted all his writings and to quote him, ‘any kind of literary contacts with me was frowned upon.’  It was at that time Abbas brought out his own magazine Sargam in Hindi which was intended to popularize Urdu literature through the Devanagri script.  I could not lay claim to any literary work, but I had done a fair amount of writing in English journals. Additionally, I knew Urdu and I was unemployed. So Abbas inducted me into his magazine as a regular contributor. This was the beginning of my career as a film historian. The first person I interviewed was Khan Bahadur Ardeshir Irani who very generously gave me not only his time but also valuable old film material. I even made a trip to Poona to meet Damle and Fatehlal and brought back some rare photographs. Every week I would be meeting either a filmmaker or a film artiste.

I remember interviewing Sardar Chandulal Shah and Goharbai, Motilal and Jairaj at Ranjit Studios. I met Ashraf Khan, Mubarak, Nawab. Master Nissar, Jillobai, Sulochana, Gulab, Sabita Devi, Rose, the Billimoria brothers, Jal Merchant, Sohraj Modi, Mehboob, Kardar, Madhuri and many others. I learnt more about the Indian film industry from these people than from a dozen books. All thanks to Abbas, who after reading my first article said, ‘Garga, we are going to make you the Boswell of Indian cinema’.  I wrote for the magazine in every single issue as long as it lasted, that is as long as Abbas could afford to lose money.

I must jump ahead several years. In 1954 Abbas had led a film delegation to the Soviet Union. On his way back he came to Paris where I was living at the time. He wanted to visit the Cinematheque Francaise, so I took him to meet Mary Meerson. The rest had better be described in his own words. ‘She said, ‘Oh! An Indian film director, I want to ask a question, we have received hundreds of copies of Indian films from our colonies. They had been put away as junk and they have been sent to the Cinematheque to make something of them. So we rummaged through them and found all the pictures rubbish, because they were fighting, dancing and singing pictures. But one picture was very special. It had no titles, it had no subtitles, and it had no dubbing. We saw it and it interested us so much that we started by seeing one reel and saw all the reels. We don’t know who has made it, not even the name of the picture.”  She then described the picture, and it was Dharti ke Lal. Then Garga told her that the director of that picture was sitting in front of her. She said, ‘Really!’ and she got up and embraced me and kissed me which was most embarrassing. This was the strange adventure I had.

For nearly two years there was no contact with Abbas. Then the bell rang in my small flat in Cromwell Road in London. There was Abbas and we embraced and he said, ‘I have come to take you back to India.’  He had just been to Moscow to negotiate an Indo-Soviet co-production on the life of the fifteenth century Russian traveller/trader Afanasy Nikitin. Afanasy had come to India nearly a decade before Vasco da Gama and left behind a highly interesting diary Voyage Beyond Three Seas. Abbas gave me a copy of the script to read and suggested that I join him as his associate director. The reason I mention this incident is to indicate the sense of loyalty he felt towards his friends. I cannot think of another man who would make such a gesture. When I returned to India for the shooting of the film I stayed with Abbas for several months and enjoyed the warmth of his friendship and his generous hospitality.

The doorbell rang once again this time at my flat in Bombay. Abbas came in wearing dark glasses because of his eye operation. As he entered he said, ‘Garga I have just received from my publishers the first six copies of my autobiography I am Not an Island. I thought I would bring you a copy’.

He was the least pompous and most generous of men. His death leaves a silence, a void, hard to fill.

The archive came to life through a useful initial contribution by Donnabelle herself, but its upkeep and maintenance over the next few years, which includes cycles of new additions, the gallery section, the eventual upload of B.D. Garga’s films and general maintenance, will require that the website generates its own revenue, or is supported by an archiving or a museum grant. While the latter may transpire over time, it is the former that can use your assistance.